Good morning good people of Akwa Ibom State. Are you residing in Akwa Ibom and its environs? Readers247online presents to you, Top Akwa Ibom Newspaper Headlines for today Tuesday, August 11, 2020.

…….presents Scorecard of stewardship to media

The Akwa Ibom State Governor, His Excellency, Mr. Udom Emmanuel has warned politicians to stay off administering fetish paths and imposition of candidates in the forthcoming Council Polls.
Speaking during the inauguration of the State Executive Council, Governor Emmanuel said such fetish plots will be resisted by his administration.
He further said that zoning will be a major factor in the choice of Chairmanship and Councillorship positions.
He made a case for a hitch-free Local Government elections and warned politicians to provide the right template for popular candidates to emerge under the existing zoning arrangement. 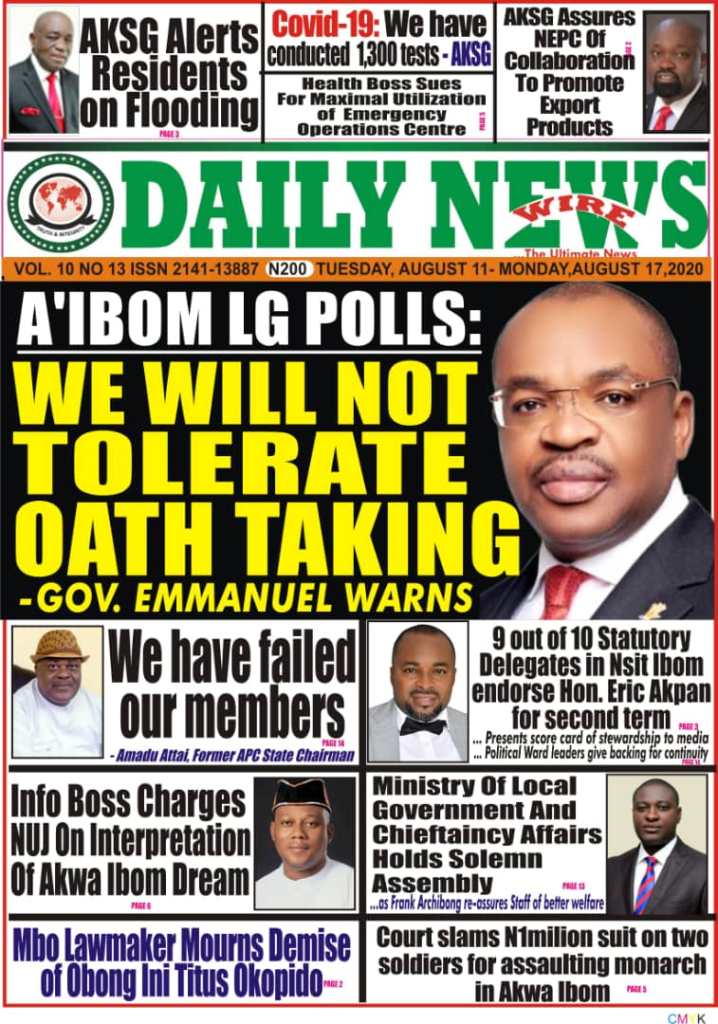 …..As Effiong Bob says zoning of Chairmanship, a collective decision

Senator Effiong Bob has said that the zoning of Nsit Ubium Local Government council Chairmanship position to Nsit axis of the local government area was a collective decision of the political caucus of the area.
The Nsit Ubium political Leader frowned at a “situation where responsible people will take a collective decision and thereafter some self seeking individuals who participated in the decision making process go out to attribute the decision to a single individual”. 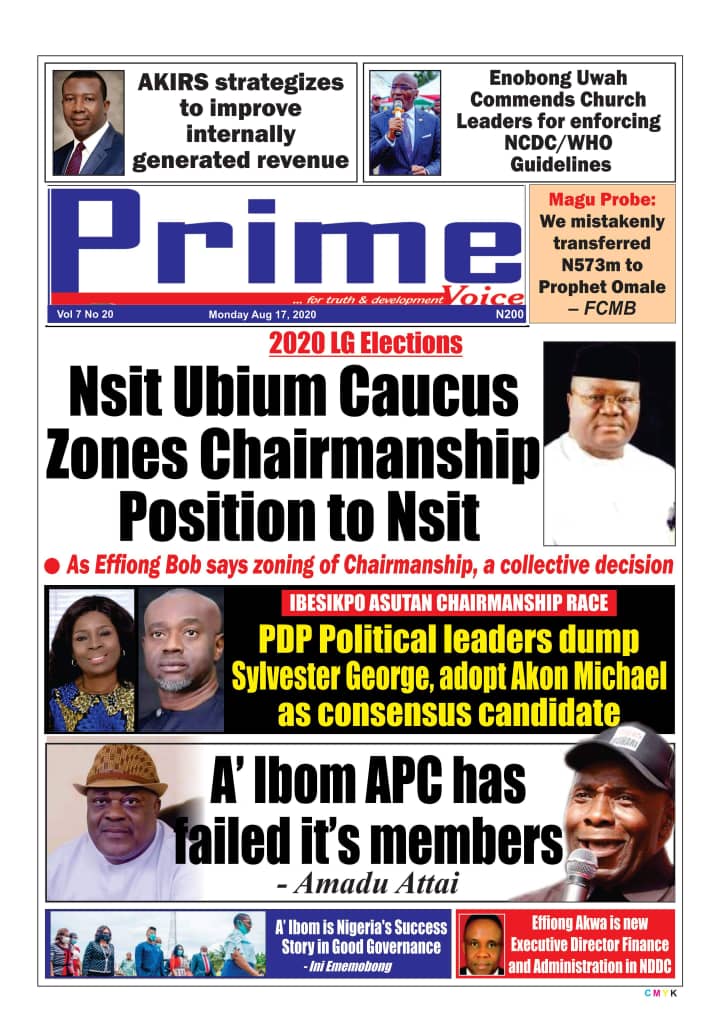 ….over mock primaries in Ukanafun

There are potent signs of imminent crisis as a result of the mock primaries held across the 13 wards of Ukanafun recently.
The dangerous flash points are southern Ukanafun Ward 3 and 4 in the Ukanafun political bloc, while wards 9, and 12 are the turbulent wards from Afaha political bloc.
It was learnt that in southern Ukanafun ward 3 and 4, that Barr. Idongesit Umoh and Hon. Israel Ebenezer are stoking another war by imposing two aspirants from their faction perceived to have affinity with the State PDP Chairman aganist the wish of the majority of stakeholders and people of the two wards.
Our political desk gathered that stakeholders of the two Wards including the current House of Assembly Member, Hon. Dr. Charity Ido who is the ward leader of ward 3 had met on Sunday, 2nd August, 2020.
In that said enlarged meeting, the Councillorship position for ward 3 was zoned to Nkek village, while that of ward 4 was zoned to Ikot Unah village. 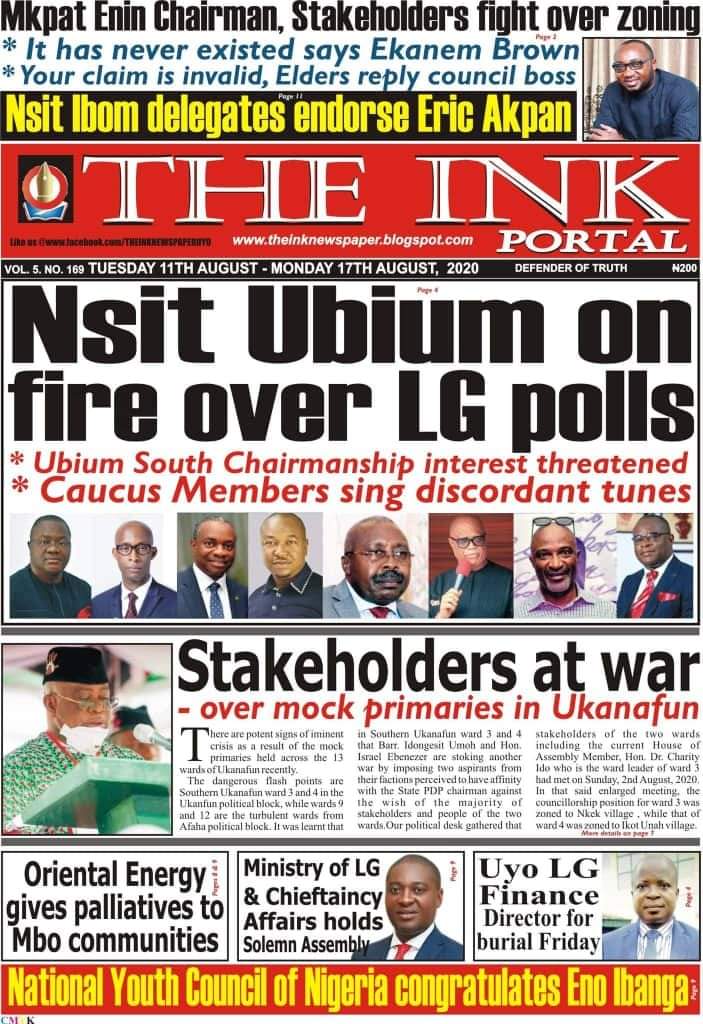 Ini local Government Area is literally sitting on a keg of gun powder waiting to explode, following pending political crisis in the area.
The bone of contention is the purported attempt to truncate zoning arrangement in Ini and the alleged administration of a traditional oath taking popularly called Mbiam.
At the centre of the looming crisis are the PDP Chapter chairman, Hon. Emmanuel Umah, and the Local government council chairman, Hon. Israel Idaisin, whom some stakeholders of the Peoples Democratic party (PDP) in the area have been accused of engaging in nefarious political activities with a view to thwarting zoning system in Ini. 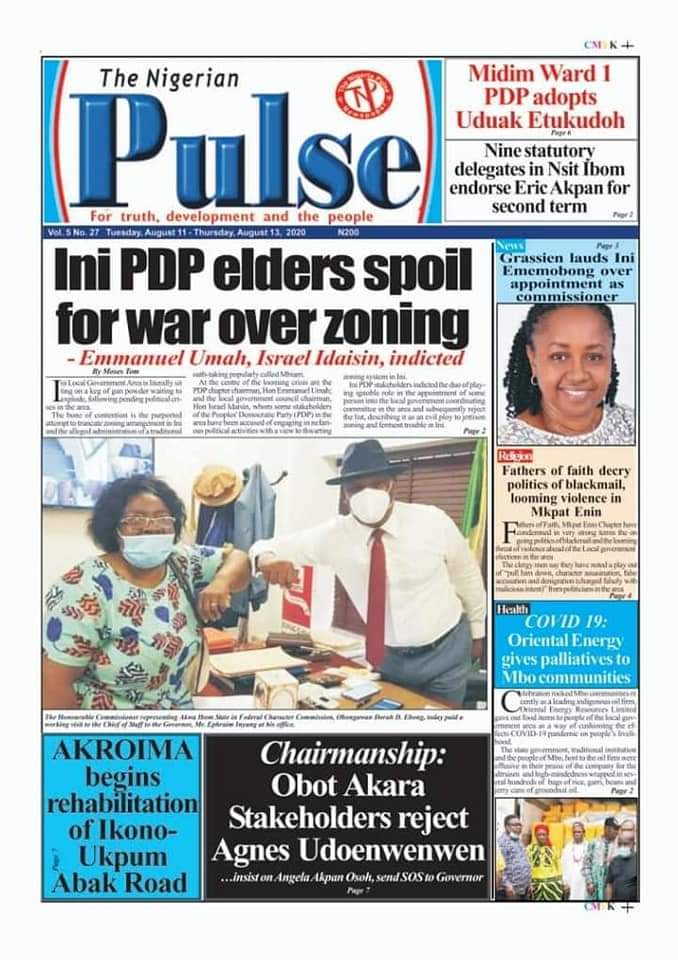 ….allegedly sells off official vehicle given to him as MP to buy nomination form

In a shocking move, the immediate past Member representing Okobo State Constituency, Hon. Efefiong Antigha has thrown his hat into the ring to contest the forthcoming Local Government election in the State.
Antigha who held sway as the Chairman, House of Assembly Committee on information during his time in the Assembly is said to be upbeat about his chances of winning the PDP ticket for the Okobo Chairmanship seat. 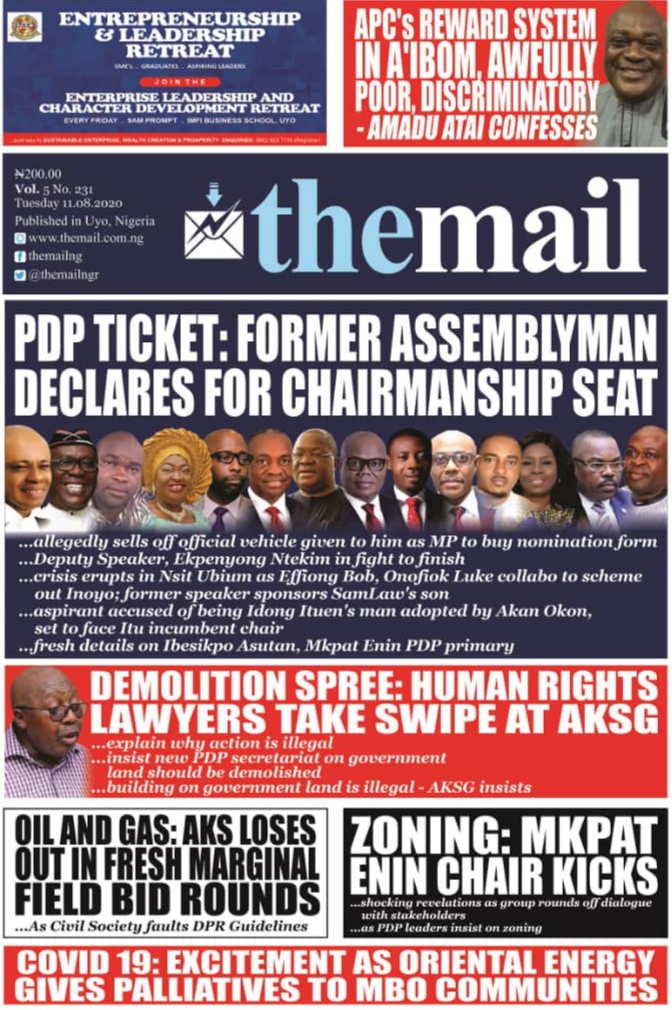 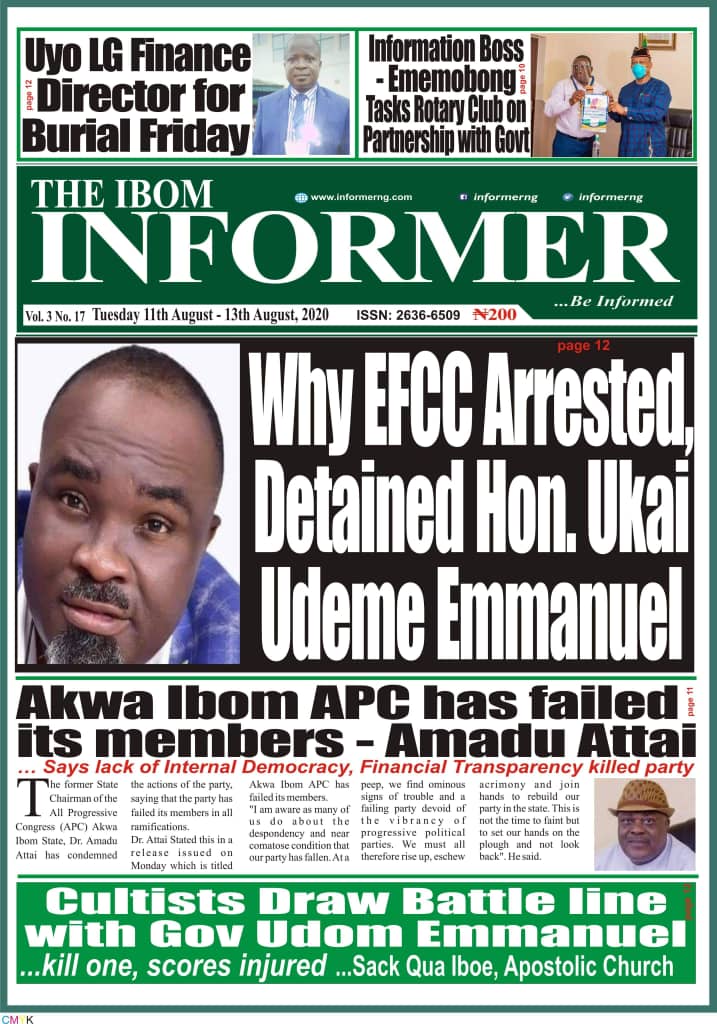 The executive Chairman of Oruk Anam Local Government, Atuekong Ubong Idiong has expressed shock that his present House of Assembly Member, Rt. Hon. Udo Kierian Akpan is nursing a fourth term ambition, saying that he has not been told about that by the Assembly member himself.
Speaking with our Reporter on the issue, Atuekong Idiong explained that even though he has heard the rumour for some time now he has not bothered to take it serious as his Assembly man has also not bothered to discuss such plans with him.
Speaking further on the development, the chairman stated that since 2023 is still far away from now it may be unnecessary to dissipate powers on such matters pointing out that “in my reasoning, such matters should be out on hold for now so as not to overheat the polity”.