Depreciation of economic trees a resultant of over exploitation of trees has been identified as one of the major environmental problems of Akwa Ibom State which undermines circulation of carbon dioxide, as the greatest function of trees, hence, need for Ibom Greener Project.

The programme was organised by the Akwa Ibom State Environmental Protection and Waste management Agency, in collaboration with Akwa Ibom State Ministry of Environment and Mineral Resources, Office of the Wife of the Governor, Deaconess Martha Udom Emmanuel, Georgie Farms and Bio Gardens among other relevant stakeholders.

In his opening remarks Chairman on the occasion and Chairman, Akwa Ibom State Environmental Protection and Waste management Agency, Prince Ikim intimated that the event as part of the activities marking the 32nd anniversary celebration of Akwa Ibom State.

Ikim disclosed that presently the world is puzzled with numerous environmental problems and Akwa Ibom in particular is facing the repercussion of exploitation of trees which is the detrimental to the environmental security of the State. 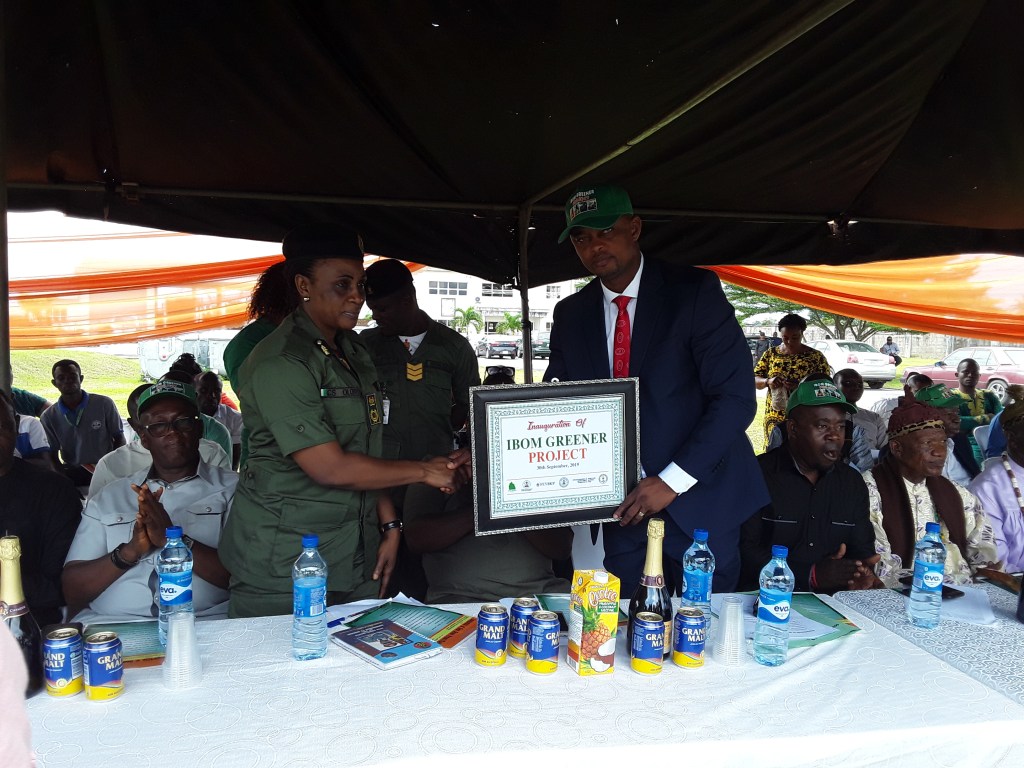 Speaking on the numerous benefits of trees to humanity and livestock, the chairman said “Trees naturally remove carbon dioxide from the atmosphere during the process of photosynthesis and in turn release oxygen as by-product. In this natural function, trees directly reduce the impact of green house effect in addition, trees provide fruits, vegetables, and fodder for animals.

“They are of great medicinal, educational, economic, artistic and social value”.

He thanked Governor Udom Emmanuel for his invaluable contributions in the developmental strides of Akwa Ibom State, he adjudged his contributions to have raised the status of the State to its present global recognised and appreciated position.

The Chairman Commended Deaconess Martha Udom Emmanuel being the most environment-friendly first lady in Nigeria, who is making indelible imprint in environmental sustainability efforts of the State.

Prince Ikim appreciated the Wife of the Governor, for her selfless contributions towards a greener and healthier environment in Akwa Ibom State, adding that her feat in the environmental sector is a perfect complement to the numerous life touching projects she has implemented through her pet project, FEYReP.

He reasoned that thousands of economic trees raised within the State through her supports are monument in the benefiting communities, schools and other public places.

X-raying the business of the day, Prince Ikim said Ibom Greener Project as the name goes, is poised towards embarking on massive regeneration and reforestation activities in Akwa Ibom through forest reserves and extensive planting of economic trees, especially indigenous fruit trees in communities, forests, schools and other public places in the State.

He remained optimistic that every tree freely distributed and planted at the end of the flag-off exercise shall remain a symbol of peace, progress for a more sustainable environment for Akwa Ibom people.

The Agency boss assured that with involvement of Cross River National Park, African Ecological Restoration Foundation and seasoned professionals from the nation’s indigenous tertiary institutions, Ibom greener project shall be sustained with attendant positive impacts on the State’s environment.

Additionally, in her welcome address, the Chief Executive Officer of Georgie Farms and Bio Gardens, Mrs. Emem Umoh raised concerns that as global environmental issues are increasingly dominating discussions with adverse effects of physical, chemical and biological integrity of plants being compromised on daily basis, bushfire, sea incursion, gully erosion and other environmental problems becoming the order of the day, tree planting becomes imperative in Akwa Ibom State which is not exempted from this global threats.

Disclosing that her organisation has 15 years presence in Nigeria with 5 impactful years in Akwa Ibom State in particular, she enunciated her feats so far in the State to include; conservation measures including tree planting in 23 three schools/communities in seven Local Government Areas in collaboration with FEYReP.

Mrs. Umoh stated that her Pet Project; Ibom Greener Project Seeks to enhance a greener and a more sustainable environment though massive tree planting with preference to indigenous and economic species, routine workshop and training for stakeholders, conservation education and awareness programme in communities, schools, and market places, establishment of nursery sites at strategic location within the State and other relevant activities in line with international best practices in environmental preservation. 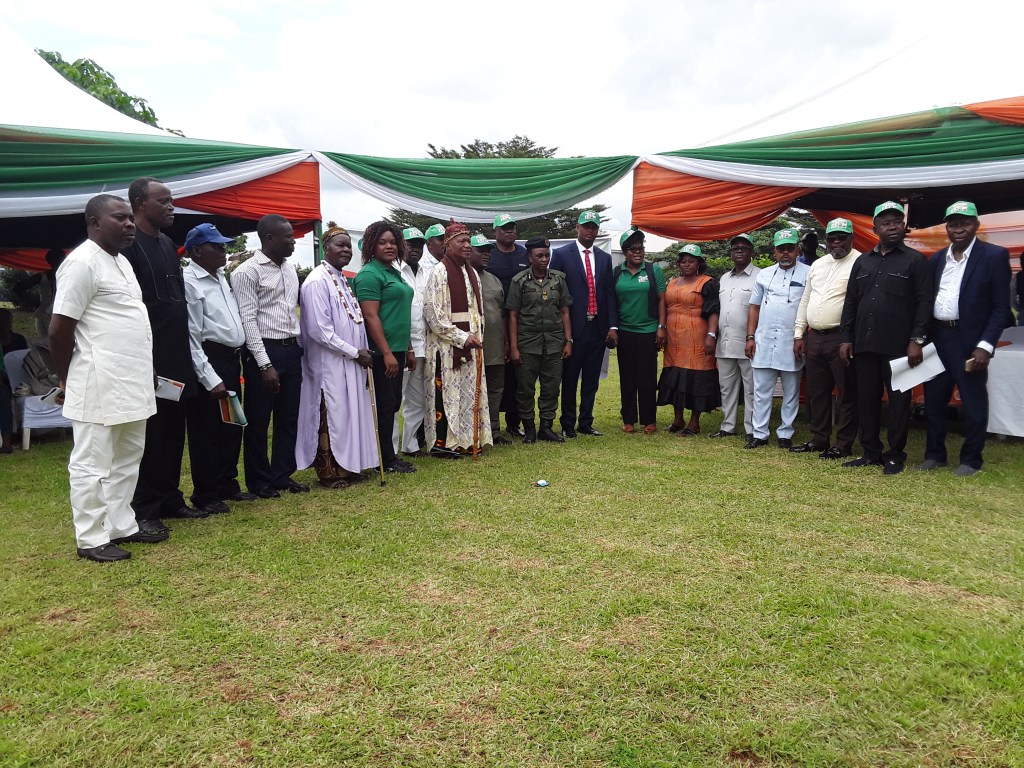 Guests at the occasion

She informed that the project when implemented is expected to increase level of awareness on biodiversity conservation and related issues, update conservation status of flagship species in both forest reserves and free areas, facilitate the recognition of Akwa Ibom State as hotspot for species of conservation importance both plant and animals, preparing ground for establishment of Akwa Ibom National Park and a conspicuously greener Akwa Ibom Environment.

She commended all environmental stakeholders who in diverse measures contributed immensely to the official flag off of the project and commended Akwa Ibom State Government, Wife of the Governor, Deaconess Martha Udom Emmanuel, State Ministry of Environment and Mineral Resources, Akwa Ibom State Environmental Protection and Waste management Agency, and other NGOs for their support so far.

She remained hopeful that in collaboration with other stakeholders, the project shall see the light of day for a greater and safer Akwa Ibom State.

They further observed that currently communities are experiencing flooding and heat due to exploitation of natural environmental protectors.

Describing a Park is an area that is set aside, not materially altered by exploitation or human occupation, they observed that Akwa ibom State is long over due for either a fumctional State forest reserve or a National park for preservation of special species like the slater’s endangered specie Quinone among other species and called for collective contribution by all stakeholders to ensure the success of the project.

High point of the ceremony was the planting of trees by Chairman, Akwa Ibom State Environmental Protection and Waste management Agency , Prince Ikim, and other partners at premises marking the official inauguration of the project.