The Akwa Ibom State House of Assembly Ad-hoc Committee which was constituted by the Speaker, Rt. Hon. Aniekan Bassey to investigate the petitions leveled against the Executive Chairmen of Nsit Atai and Uyo Local Government Areas, Hon. Emem Ibanga and Hon. Imoh Okon respectively had completed its findings into all the issues raised.

The Committee which had one month to complete it’s investigation concluded the process last Friday as they met with the suspended Chairman of Uyo Local Government Area, Hon. Imoh Okon and Staff of the Council. The Committee is Chaired by Rt. Hon. Mark Esset.

Earlier in the week, the ad-hoc committee set up to address issues on Nsit Atai Local Government Area Chaired by the House Leader, Rt. Hon. Udo Kierian had also completed its assignment on the petitions against Hon. Emem Ibanga, the suspended Council boss.

See Full List of Returning Officers for the Ward Congress Today, August, 20, 2020 in the 368 Wards in Akwa Ibom State

The Chairman, House Committee on Information, Rt. Hon. (Barr.) Aniefiok Dennis who also serves as the Secretary in the ad-hoc committees told Daily News Wire that baring any unforeseen circumstances, the reports will be presented at plenary this week. 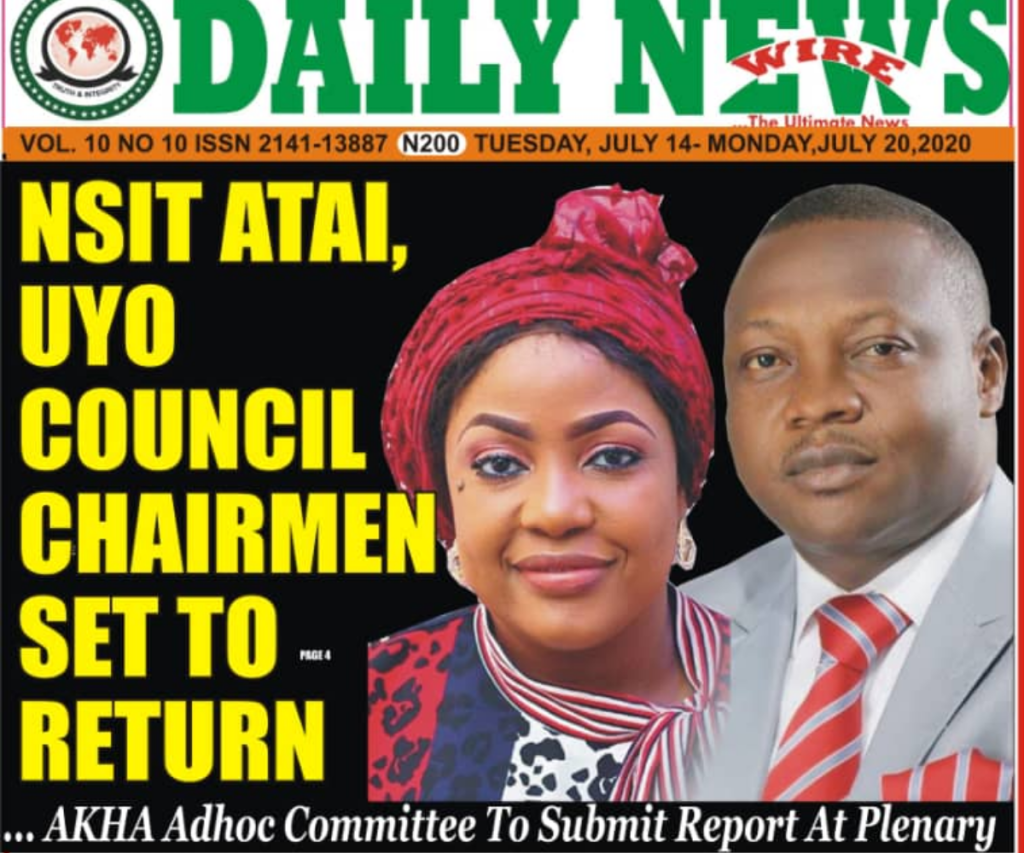 …….Says They Aee Not Political Appointmentees

Members of Akwa Ibom State House of Assembly last week disagreed with Governor Udom Emmanuel, on the 20% reduction in their salaries claiming, such was aimed at further humiliating them financially.
Chairman of the House Committee on Labour and Productivity and Member representing Ikot Ekpene Obot Akara State Constituency, Idongest Ntekpere and his colleagues insisted that the attempt to slash their salaries and imprest by 20% was highly provocative especially as the State Chief Executive did that without due consultation with them.
Legislators during an Executive Seeion roared that the decision take unilaterally by the Governor is an affront on them as they are not aides of the Governor nor his appointees. 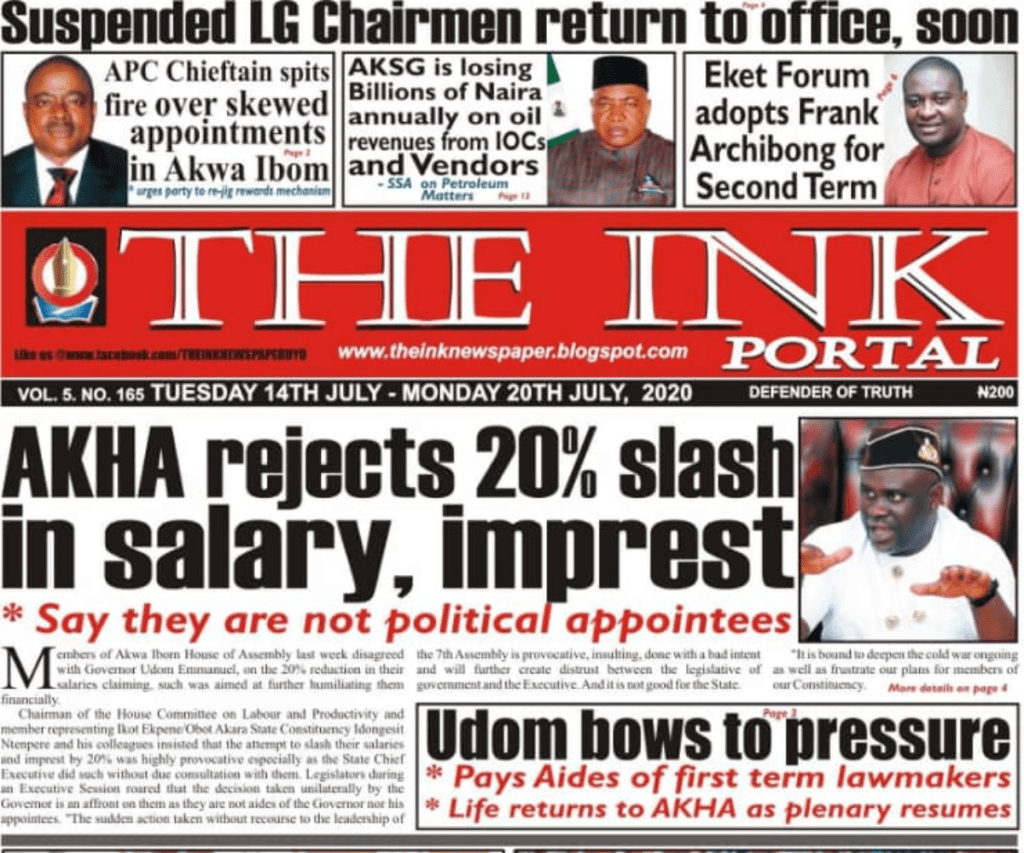 3. I Slapped Akpabio For Sexually Harassing Me, Says EX-NDDC MD

……No Light In NDDC Because Akpabio’s Girlfriend Supplies Diesel – Nunieh

…… She was sacked For Insubordination; She Has Temper Issues – Akpabio

Joy Nunieh, former acting managing Director of Niger Delta Development Commission (NDDC), says she slapped Godswill Akpabio, minister of Niger Delta Affairs, for sexually harassing her.
Speaking on Monday, during an interview on Arise TV, Nunieh said the incident happened at the minister’s guest house in Abuja.
She said her reaction to the alleged harassment proved her intolerance for “nonsense” as a woman from Rivers State. 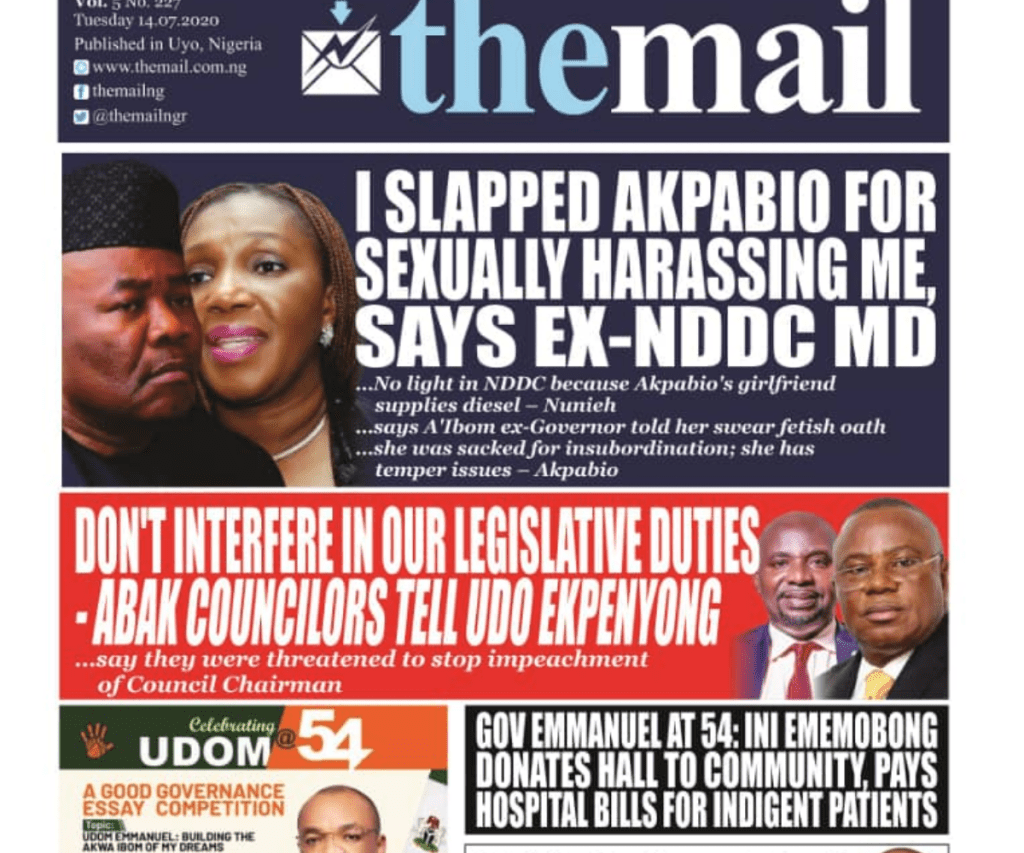 Former Managing Director, Interim Management Committee (IMC), Niger Delta Development Commission (NDDC), Dr. Joy Nunieh, Monday claimed she slapped the Minister of Niger Delta Affairs, Senator Godswill Akpabio, in his Abuja home for sexually harassing her.
Earlier, at the weekend, Akpabio had during an interview on Arise TV, accused Nunieh, who was removed about six months ago, of unnecessary paranoia, which he said affected her alleged relationships with her previous for husbands.
Akpabio also accused Nunieh of insubordination, failing to respond to official memos as well as lacking the requisite qualifications for holding a high office like the headship of the NDDC. 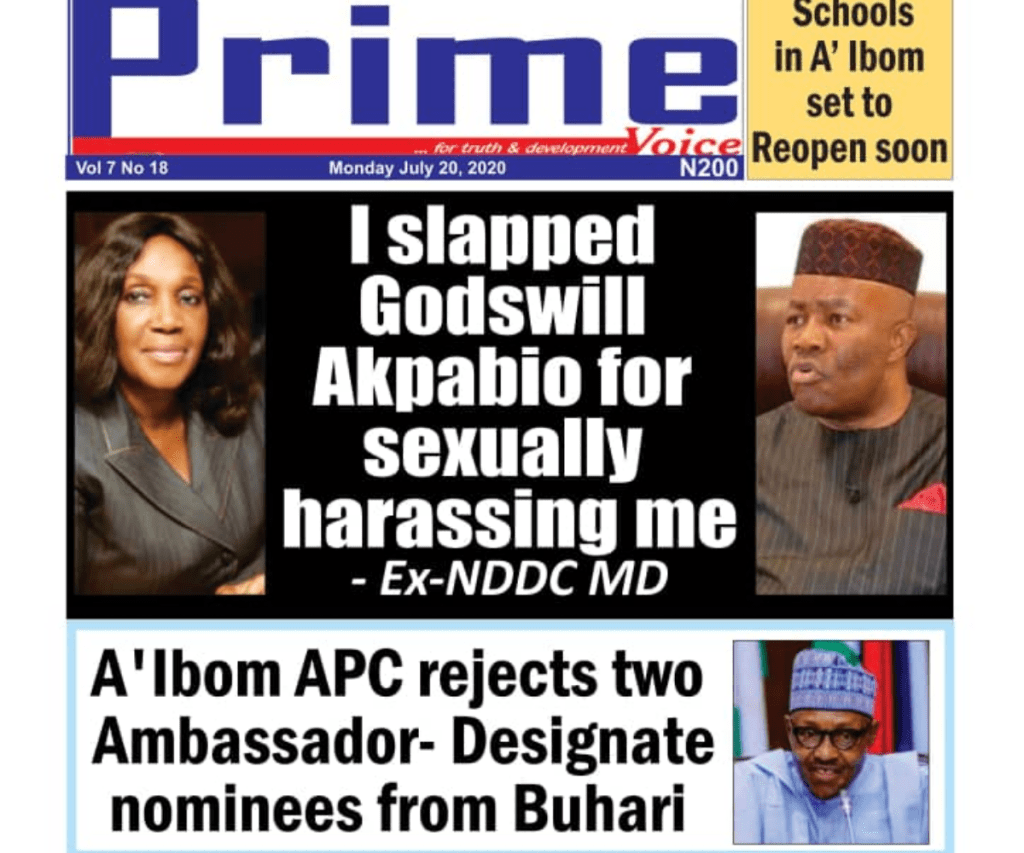 A chieftain of All Progressive Congress (APC), Chief Effiing Abia has taken the party to the cleaners over the alleged lopsided method adopted by the party’s hierarchy by dishing out political appointments to politicians from the State.
This is coming from the heels of the recent attacks of the Presidency by the State Chapter of the party, which accused President Muhammadu Buhari of employing “unfamiliar method” in appointing people from the State into his administration.
Abia, a former Commissioner for Rural Development said it was high time the party rejigged its reward system otherwise loyal members would be discouraged from putting in their very best in the build up to 2023. 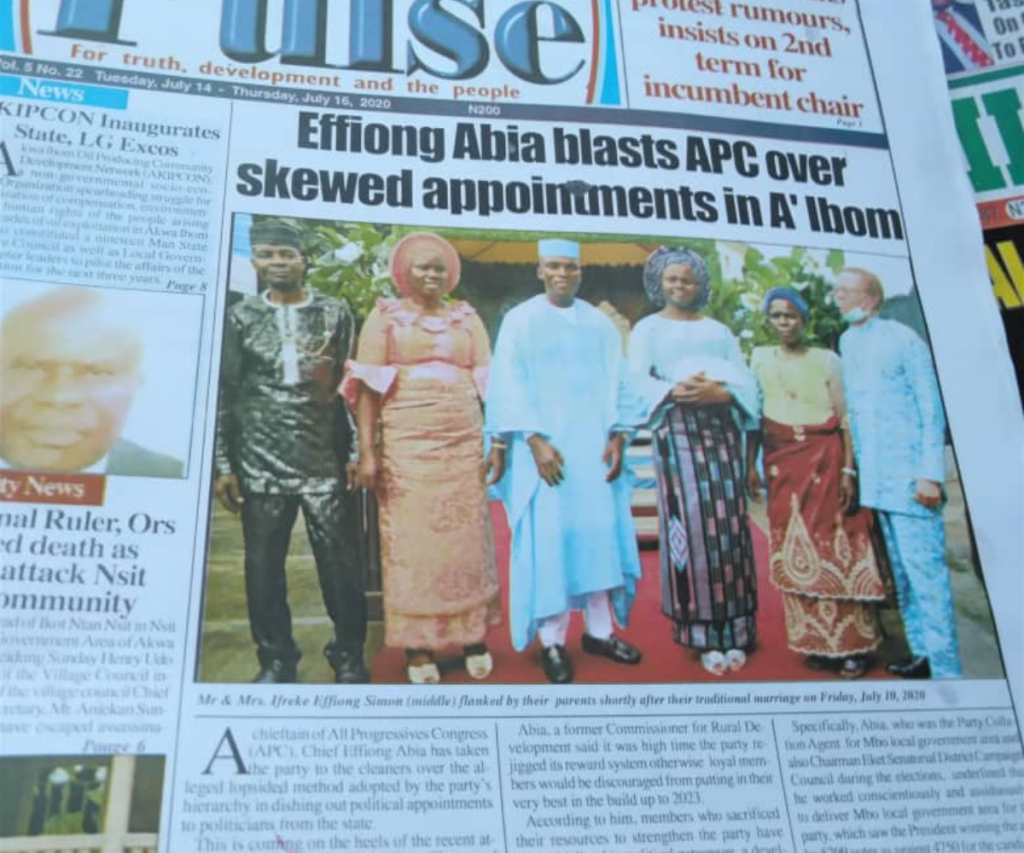