Messrs Nigerpet Structures Limited has been directed by Akwa Ibom State government to as a matter of urgency mobilise and repair the collapsed section of Ikot Akpaden-Okoroete road in Eastern Obolo Local Government Area.
In a press release signed by the Chief of Staff to the Governor/Commissioner for Works, Akparawa Ephraim Inyang-Eyen, Messrs Nigerpet Structures Limited is directed by the State Government to immediately move to the said site and execute remedial work while the State Government is equally soliciting for maximum co-operation from the public during this period of repairs.
The State Government further empathized with the residents of the affected communities and sue for their understanding throughout this period of remedial work.
It could be recalled that yesterday, some journalists in Akwa Ibom State took to their facebook accounts and other social media platforms scary pictures of the failed portion of the road which posed danger to residents, road users and also disconnected the neighbouring communities. 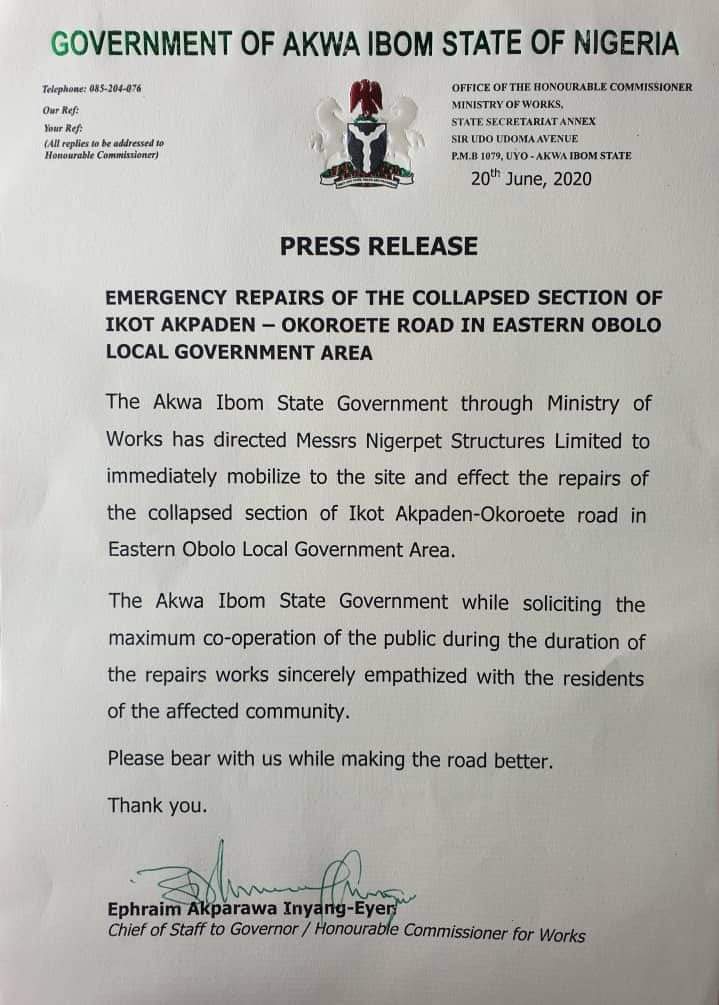 Subsequently, earlier today, the member representing Ikot Abasi/Eastern Obolo State Constituency and Chairman, Committee on Appropriation and Finance, Rt. Hon. Uduak Odudoh went to the affected area for an on the spot assessment of the road.
Impressively, in line with the usual responsiveness of the present Government to the plights of the masses, the the State Government contracted Messrs Nigerpet Structures Limited to move to the site and profer lasting solution to the road in order the ameliorate the situation as the rains get heavier.
The contracting firm, Messers Nigerpet Structures Limited has been around in Akwa Ibom State for a number of years now and they are trusted hands and experts in remodeling and road construction alike.
Some of the projects executed by the company within Uyo metropolis are: Nwaniba -four lanes – power City beautification, erosion control at Brooks Street, remedial work at IBB Avenue Waterlog, etc.