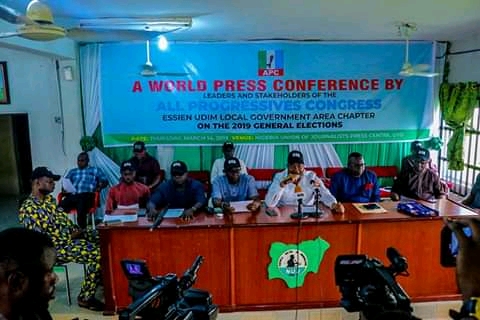 Earlier today, All Progressive Congress (APC) Stakeholders in Essien Udim Local Government Area of Akwa Ibom State intimated pressmen in Uyo on the aftermath of March 9, 2019 gubernatorial and State House of Assembly elections in the area.

Below is excerpt from the text of the press conference:

“We are constrained by recent developments in the polity especially the rash of press briefings by hired political mercenaries and carrion feeders, all in attempts to diminish the person of His Excellency, Distinguished Senator Godswill Akpabio, CON, one of whom was a National Youth Corps Member in his office, but today takes delight in disparaging him through wild, fictitious and unsubstantiated allegations.

“They can gloat over the pyrrhic victory of the Peoples Democratic Party (PDP) in the 9th March 2019 election – an election that will go down in history as the biggest, most elaborate fraud executed by the Akwa Ibom State Government headed by Mr. Udom Gabriel Emmanuel in collusion with a compromised Akwa Ibom State Office of the Independent National Electoral Commission (INEC), superintended over by Mr. Mike Igini, the Resident Electoral Commissioner. However, Akwa Ibom people, foreign and domestic observers will be interested to witness how they will defend this electoral heist and day light robbery.

“We have been of the conviction that since Governor Udom Emmanuel was running for a second term, his first term achievements should have formed the fulcrum of his campaign for re-election. His first term accomplishments should have been the basis for seeking re-election, which is the standard the world over. Unfortunately, his campaign was based on divisiveness, character assassination, industrialization propaganda, ethnic bigotry, monetary inducement, and 2015 campaign/first year endorsement by Senator Godswill Akpabio pronouncing eight years for a government he thought was going to perform.

“We recall with pride and a huge sense of fulfillment, the verifiable accomplishments of His Excellency, Senator Godswill Akpabio in his first term as Governor, which included the construction of a brand new Governor’s Lodge; reconstruction of over 300 urban roads (49 in Eket, 23 in Ikot Abasi, 33 in Ikot Ekpene, 34 in Oron, and over 70 in Uyo and 15 in Abak etc.

“Fire system, warehouses; massive renovation and construction of classroom blocks across the state; introduction of free and compulsory education to all Nigerian children resident in Akwa Ibom with payment of subvention to school heads; completion of the ongoing Ibom Power Plant at Ikot Abasi thereby adding over 140 megawatts of electricity to the national grid.

“Partnering with Seven Energy to build the first gas processing plant at Esit Eket thereby giving a life line of gas supply to Aluminium Smelter Company in Ikot Abasi and the Independent Power Project; construction of the 44km Enen Nsit road with four bridges; raising electricity coverage from 37 percent to over 70 percent in his first term; construction of cottage hospitals across the state from Ibeno, Eastern Obolo, Ika, to Essien Udim; massive empowerment of Akwa Ibom people across the state; dualization of Aka Nung- Udoe-Ibesikpo road, construction and dualization of a brand new boulevard adjoining the Godswill Akpabio International Stadium which he initiated and completed among other laudable projects.

“However, having failed woefully in the past four years to execute any meaningful project, Governor Udom Emmanuel resorted to investing heavily in propaganda to pull wool over the eyes of unsuspecting Akwa Ibom people and Nigerians. Most projects the administration claim to have executed, like the fertilizer blending plant, the rice mill, and the ranch with 2000 Mexican cows, International Worship Centre etc can be found on billboards strewn all over the State. Suddenly an administration which had hitherto claimed there was no money in the state to execute any meaningful project invaded the state vault, threw it open just to purchase victory at the polls on March 9, 2019.

“Never in the history of elections in Akwa Ibom State, nay Nigeria have we witnessed such a heist and electoral robbery aided by a compromised umpire, Mr Mike Igini, the Resident Electoral Commissioner like the last general elections. As we speak, just yesterday, one of the INEC trucks conveying ballot papers earlier voted in favour of the All Progressives Congress (APC) were being transported to a location near INEC office in Uyo for destruction and subsequent replacement with ballot papers fraudulently thumb printed all in attempt to cover their tracks and prepare for inspection by the tribunal panelists.

“In the process one of the vehicles got involved in an accident in Abak spilling and exposing the thousands of the ballots voted by Akwa Ibom people in favour of the APC. The truck driver on interrogation confessed that that was the sixth trip that day shuttling to different PDP stalwart houses in different locations in the state to convey APC voted ballot papers for destruction.

“The occupants of the ill-fated truck have confessed to the brazen robbery perpetrated by the Independent National Electoral Commission (INEC) under the supervision of Mr. Mike Igini. The accidented truck with some of the contents is still parked at the Police Station in Abak.

“We have it on good authority that spirited attempts are being made by the PDP administration in Akwa Ibom State in collusion with INEC to destroy the evidence of the electoral fraud. We hereby call on the Commissioner of Police, Akwa Ibom State and other security agencies to take safe custody of the truck and its contents and investigate the matter with a view to bringing the culprits to book.

“It has also been revealed that Mr. Mike Igini’s INEC in the last few days after the election has been working tirelessly to destroy the original ballot papers and the photocopied unit registers and result sheets which he used for the two elections and replace them with original result sheets to cover up the massive electoral fraud of 23rd February and 9th March 2019.

“Those who have stolen the peoples mandate have been unable to sleep with their two eyes closed after the elections. We have implicit confidence in the judiciary to do justice to our people and restore their right to freely choose their leaders without manipulation as carried out by a compromised INEC under Mr. Mike Igini.

“The so-called press conference by Essien Udim political contractors is even more laughable. They may deceive their pay master in Uyo to extort more money from him, but they cannot bury the truth. The truth as corroborated by independent election observers is that on election day cases of ballot box snatching, hijack of electoral materials and abduction of electoral officials by chieftains of the Peoples Democratic Party were reported and distress calls made by helpless APC agents.

“Together with a gang of thugs, they snatched Okon Ward materials at gun point and kidnapped the INEC staff with materials. Surprisingly, they turned up at the collation centre at INEC office in Essien Udim with results from Okon Ward all in favour of their party, the PDP. It was when the collation officer insisted on collating the forged result that the APC agent raised an alarm and phoned Senator Akpabio and other APC leaders. Senator Akpabio immediately went to the Electoral Officer to lodge a written complaint against the collation of Okon Ward. The abducted INEC staff and Corps members confessed to the rigging before the Electoral Officer in charge of Essien Udim Local Government Area.

“At the Electoral Officer’s office, Senator Akpabio spoke to the Resident Electoral Commissioner, Mr. Mike Igini through the telephone of the Electoral Officer to lodge the same complaint and thereafter left the premises. When the results were collated and announced, Senator Akpabio was no where near the INEC office. So how come these so-called Elders could fabricate lies from the pit of hell in an attempt to malign the good name of Senator Godswill Akpabio, their own illustrious son? It is instructive that Senator Akpabio never had any soldier attached to him. Throughout the election, he visited only his polling unit and INEC office to lodge a complaint.

“It is on record that the Divisional Police Officer of Essien Udim Local Government Area arrested some PDP stalwarts at the collation centre for intimidating and harassing Corps members and electoral officials and attempting to change Unit results in favour of the PDP that lost woefully in the entire Local Government. We noted that even in our local Government Area as it happened throughout the state, that majority of the collation officers were members of the PDP who engaged in massive cancellation of APC votes under the guise of Card Reader differentials, the only LGA in Akwa Ibom State that the Card Reader was applied hence in the National Assembly election, Senator Akpabio’s votes were reduced from 75,000 to 61,500 and in the governorship election, the votes of our gubernatorial candidate, Obong Nsima Ekere.

“Please note that Essien Udim Local Government is the local Government with the second highest voting strength in Akwa Ibom Stateafter Uyo. According to INEC over 105,000 permanent voters’ cards were collected from Essien Udim LGA and yet Eastern Obolo with less than 15,000 voting strength, collected 10,000 pvcs and they voted for Udom Emmanuel and Mr Mike Igini collated and announced such result!

“Senator Akpabio represents 10 LGAs. Units, Wards and LG results of nine LGAs were collated and announced at the Senatorial headquarters. A phone call to the Senatorial Collation Center sent the collation officer scampering for over five hours. Shockingly, at Mr. Mike Igini’s office in Uyo we heard that he had re-collated the re-collated votes and reduced the votes of Senator Akpabio from various Local Government Areas already announced, including reducing the result from Essien Udim to 5,000 which led to his purported announcement of somebody else as the winner of the election.

“All Progressives Congress Elders and stakeholders strongly condemn the antics of Senator Bassey Albert a former Commissioner for Finance in Senator Godswill Akpabio’s administration for submitting a false petition against the person of Distinguished Senator Godswill Akpabio on the floor of the Senate. If anybody should be questioned on electoral infraction, it is Senator Bassey Albert that ordered his band of thugs to kill three APC members in his home Local Government Area, Ibiono, a matter still under investigation by the Police. We hereby caution him to use his head while struggling for cheap political relevance. Senator Akpabio remains a pride to Essien Udim LGA and a priced property of Akwa Ibom State. He should immediately withdraw his sponsored petition against Senator Akpabio and apologize to his former boss/benefactor.

“Instead of being worried about the survival of democracy in Nigeria with the likes of Mike Igini, some Akwa Ibom Elders of PDP extraction shamelessly addressed a press conference making false accusations against a leader, a nationalist and a man of peace. This is unfortunate! Regrettably, monetary inducement has blurred the sight of most Akwa Ibom Elders including some from Essien Udim Local Government Area, Essien Udim in the PDP led by Chief Michael Afangideh, Chief E. P. Umanah, Sir Emem Akpabio among others. We must commend Senator Akpabio for his peaceful disposition and insistence on following the due process of the law. APC members should remain calm and law abiding while pursuing their legitimate claims at the courts.

“Finally, we advise these carrion feeders never to gloat over this stolen mandate. Their so-called gubernatorial victory can only be pyrrhic. Very soon those attempting to denigrate their benefactor shall soon see that Akwa Ibom people and Nigerians have no regards for ingrates.

“We thank the teeming supporters of President Muhammadu Buhari and the APC family in Akwa Ibom State for remaining law abiding. We assure them that all stolen mandates ofthe APC will be retrieved”.