In preparation for the local government elections on October 31, Akwa Ibom Independent Electoral Commission (AKISIEC) has re-aligned electoral wards and created 39 new ones for use during the forthcoming elections in the state.

By this, AKISIEC has created 13 electoral wards in each of the three Senatorial Districts of the state, bringing the total number of wards to 368.

Before now, the state had 329 electoral wards spread across the 31 local government areas of the State. 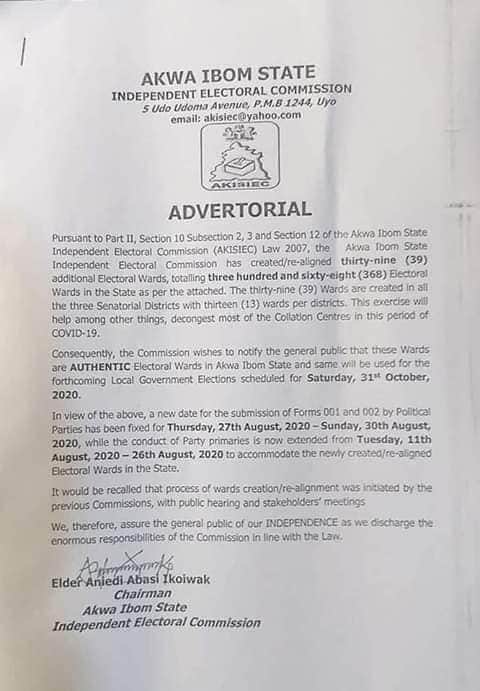 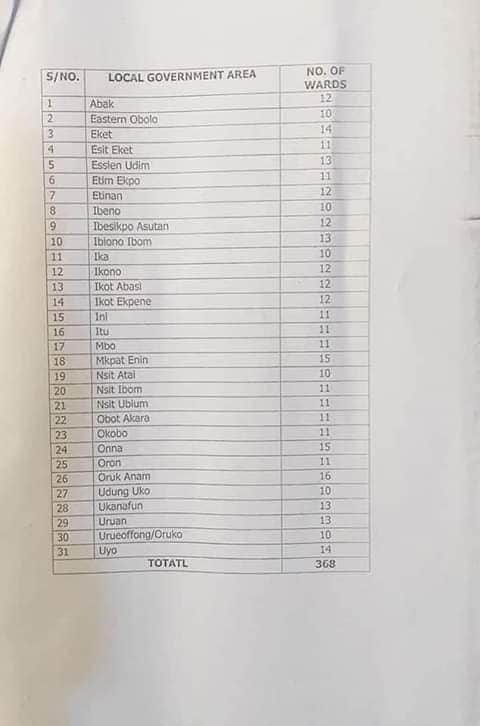 Addressing the press at AKISIEC Office, 5 Udo Udoma Avenue, Uyo on Sunday, Elder Aniedi-Abasi Ikoiwak, the Chairman, said this was done pursuant to Part 11, Section 2, 3 and Section 12 of Akwa Ibom Independent Electoral Commission Law 2007 to help decongest most of the Collation centres during COVID-19.

The chairman, Ikoiwak said though his commission inherited 237 wards, the law empowers it to create new wards every 10 years.

“Consequently, the commission wishes to notify the general public that these wards are AUTHENTIC electoral wards in Akwa Ibom State and same will be used for the forthcoming local government elections scheduled for Saturday, 31st October, 2020,” he announced.

The Chairman, however, stated that despite the creation of the new wards, elections would still hold at the existing 2918 polling units in Akwa Ibom state.

How 17 Akwa Ibom Council Chairmen Battle For Second Term, Their Chances Of Winning