Akwa Ibom State House of Assembly has issued ultimatum to Council Chairmen to present official vehicles to principal officers of their councils on or before October, 31st, 2019 in accordance to the directive of the State Government.

Arriving Ukanafun Local Government Council being the first point of call, the committee was received and conducted round the Council’s facilities by the Executive Chairman of the Area, Rt. Hon. (Prince) Uko Idiong.

Accompanying the chairman while seeing the committee through the Council’s facilities were: The Vice Chairman, the Secretary, Head of Service, councillors, Leader of Legislature, Supervisors and Special Advisers, Directors and others.

Presenting his scorecard to the committee, Hon. Idiong listed his expenditures and achievements as follows: N2.4 million for reactivation and restoration of electricity to Ukanafun Local Government Area, N1.8m renovation of women development Centre within the Council’s premises, roofing of Women development centre to the tune of N2million.

The chairman emphasized that the return of peace and normalcy have been his greatest achievement in office and pleaded with the State Government to as a matter of urgency rehabilitate over 200 unrepeated youths of the area who are currently making life unbearable for the good people of Ukanafun local Government Area.

Committee’s Response
The committee congratulated the Chairman combating security challenges in the area to some extent and charged him to top up his games in providing security measures that shall further protect the council from hoodlums.

The Chairman of the Committee, Rt. Hon. Elder Mark Esset commended the chairman for embarking on laudable and life touching projects in the area. He also encouraged him to take charge of the hygienic condition of the Council to depict the true picture of government seat of power at the grassroots. 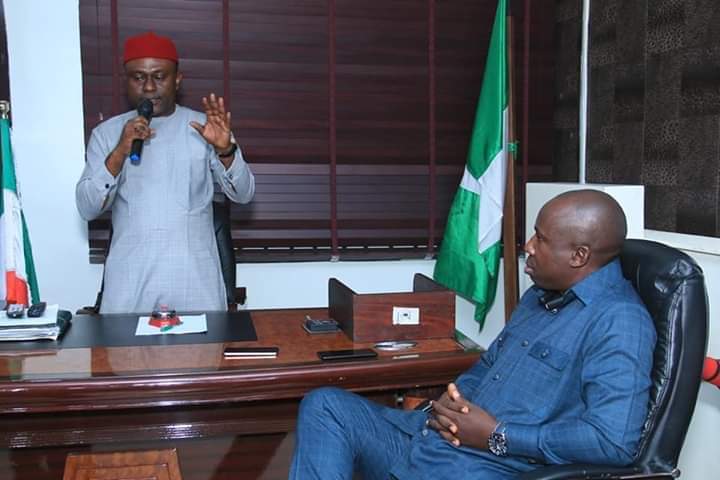 Received by the Vice Chairman of the Council, Rt. Hon. Edwin Udofa , on behalf of the Executive Chairman, Hon. Ubong Idion who was unavoidably absent based on health related issues, the committee assessed how Oruk Anam has fared as a council in the past two years, her achievements, numerical Strength of Staff, developmental strides, and challenges of the council.

Queried on the reasons behind the poor sanitation of the council, the Vice chairman blamed the unkept environment of the council on the nonchalant attitude of labourers, a flimsy excuse, that didn’t go well with the committee.

With staff numerical strength of 384, it was visibly evident that staff turned out a monday morning was quite un-appreciable. The chairman of the Committee expressed displeasure over such uncommitted approach towards work by the staff of Oruk Anam Local Government Area.

However, Upon inquiring to ascertain the level of compliance of Government directive on presenting official vehicles to principal officers of councils, the Head of Service, Oruk Anam Local Government Area, Mrs. Affiong Ebiere debunked that till date she hasn’t received an official circular mandating the execution of such directive.

“I have not seen the circular directing that all principal officers of councils be given official vehicles” Mrs. Ebieme defended!

It was further discovered that irrespective of the Governor’s directive, it’s only the Vice Chairman of the Council that has been presented with an official vehicle.

The Council’s Modest Achievements
The Vice Chairman of the Council, Rt. Hon. Edwin Udofa, disclosed that the Council among other intending projects has renovated a structure for skill acquisition programme to the tune of N2.5 Million, and set to lay foundation for proposed Sports Academy within the council’s premises in Ikot Ibritam, the Council Headquarters for the period of two years in office.

Committee’s Verdict
The Chairman of the Committee, Rt. Hon. Elder Mark Esset on behalf of the Committee issued an ultimatum, mandating all chairmen of the 31 Local Government Council to issue official vehicles to all principal officers of councils on or before 31st, October, 2019, in accordance with the government directives in this regards.

Hon. Esset reasoned that, the HOS, as a seasoned administrator, ought to have known that executing Government’s directive should be treated with outmost urgency and condemned the nonchalant attitude of the HOS of the council as the directive has currently ran into three months.

Based on some unsatisfactory answers as provided by the Vice Chairman of the Council, the committee has invited Vice Chairman, Principal Officers, Head of Service, Director of Finance, Director of Works Council and other heads of departments to appear before the Committee on Friday, 18th October, 2016 at the Assembly Complex by 10 am.

They are to appear with the following documents: List of projects executed by the Council since 2019, the amount, approvals and the level of project executed.

Welcoming the Chairman and his retinue to his Office, the Chairman disclosed that ranking top in his achievements so far in office is the restoration of peace and stability in the Ika Local Government Area.

The chairman enumerated some of his achievements in office within this period under review as follows: renovation of dilapidated structures within the council, refurbishing of Ika Legislative Chambers, roofing of Ika Mini Sports Stadium a.k.a ( Ika Unity Stadium), and grading of 52 kilometres of access road.

Others are: printing and distribution of 10, 000 exercise books to both private and public schools in the area, relocation of the council’s Cenotaph back to the Council’s premises while plans are on top gear towards perimeter fencing of the council.

Committee’s Response
The Chairman of the Committee, Rt. Hon. Mark Esset commended the visionary leadership of the Chairman for interpreting the policy thrust of Governor Udom Emmanuel’s administration, hence delivering dividends of democracy to the doorsteps of the people.

The committee further observed that the chairman’s performance portrays commitment and purposeful leadership and urged him to maintain in the tempo for the common good of all.

While charging him on improving on the sanitation situation of the council, the committee sincerely, appreciated the chairman for restoring peace back to the council, noting that development and growth thrive under a peaceful atmosphere.

Rounding up yesterday’s visitation to councils, the Committee landed Etim Ekpo Local Government Council and Hon. Udeme Eduo the Executive Chairman of the Area alongside his lieutenants ushered them to the Chairman’s office where he reeled out his achievements in office to the committee.

Etim Ekpo Local Government Area
The Council Chairman, Hon. Udeme Eduo pin pointed to the return of peace and stability in the area, a feat he deemed appreciable by all sons and daughters of Etim Ekpo and passersby.

He attributed the successful security victory of the area to the proactive approach of Governor Udom Emmanuel.

Unpacking projects embarked by his administration to the Committee, the Chairman enunciated as follows: delivering of seven transformers for restoration of electricity to the area through inter ministerial Direct labour Committee and provision of pipe borne water at the Council’s premises, Human capacity development, renovation of mini sports stadium, with an under way perimeter fencing project.

Hon. Eduo also disclosed that dozens of exercise books have been printed and donated by Councillors from Etim Ekpo to students from Etim Ekpo Local Government Area in six tertiary institutions.

He lamented that about 73 communities in Etim Ekpo are living under total black out thanks to insurgencies that plagued the area few years ago and called on the State government to intervene and restore light back the affected communities.

Present during the committee’s visit were: Vice Chairman, the Leader of the Council, Deputy Leader, Head of Service, Etim Ekpo Local Council, Head of Administration, Councillors, Supervisors and other security chiefs of the area.

Committee’s Response
Rt. Hon. Esset lauded the Chairman for restoring and maintaining peace and security in the area.
He used the opportunity and commend Governor Udom Emmanuel for returning peace to Etim Ekpo, Ika and Ukanafun Local Government Areas.

The Nsit Atai Lawmaker’s appreciation also went to the security agents who contributed immensely towards the restoring peace to affected areas in the State and observed that normalcy has been restored to the affected areas.

The Committee for purpose of clarity, advised the Chairman to forward documents capturing the achievements, prospects and challenges of the Council to the committee before the end of the week and urged him to maintain good hygienic conditions around the council premises.